The world seems to have hit a tipping point when it comes to immersive environments, and the pace of change is exploding. These changes have been dramatically reflected in the readership of this site over the past couple of months. My life is about to change dramatically as well.

So this is a good time for me to think about what I am doing with Hypergrid Business — and to adjust course, if necessary.

This is going to be a long article, so here’s the quick summary: Same amount of OpenSim coverage, a bit more about VR gadgets and apps, and no more enterprise technology coverage. Ads will be free.

What is enterprise coverage?

I’ve been covering enterprise technology for nearly 20 years now. It’s about how businesses, non-profits, educational institutions, and governments use technology. It’s a good field for a journalist to be in because the stories are interesting, there’s always something new to write about, you feel like you’re making a difference and helping make the world a better place. Plus, there isn’t much competition — you wind up writing about legal issues, compliance, statistics, finance and a lot of other heavy-duty topics while most other tech journalists would rather write about games and cool gadgets.

During the course of my career, I’ve been a staff writer at Computerworld, ran a business news bureau in China, and, most recently, covered cybersecurity for CSO magazine.

When I first heard about Second Life, I thought it was the coolest thing ever. The ability to easily design a virtual world — and have other people visit it — seemed amazing. I logged it, like it, but couldn’t see any practical use for it.

Then, back in 2009, I had just returned from China and was lamenting the fact that travel budgets were being cut everywhere due to the stupid financial crisis and I wasn’t being sent out to attend conferences anymore. I love going to tech conferences, and dialing into to earnings calls just isn’t the same thing, not even if they also show some slides while you listen to the presentation and get your one question queued up.

But IBM was holding a conference in Second Life, so I dusted off my old Second Life avatar and went in. And it was remarkably like attending a real life conference. You got to schmooze with the other attendees and introduce yourself to the speakers before the event. Then, afterwards, go up to them and ask follow-up questions, exchange contact information, schedule follow-up interviews.

It’s was eye-opening — but it got even better. The topic of the conference was OpenSim, and I learned that there was an open source alternative that enterprises could run behind their firewalls, and, if they wanted, allow users to teleport between different worlds, owned by different companies.

So I went and tried to find out more, and discovered that nobody was really covering this space. So Hypergrid Business was formed, and the idea was that I would write about enterprise applications of this, get to know everybody doing anything in this space, and when it exploded, I would be the leading journalist in this space. Plus, if there were any business or investment opportunity, I could grab them first. I’d be rich! Rich, I said! Bwa ha ha ha ha!

Where we stand now

Since Hypergrid Business first launched back in mid-2009, we’ve published 2,824 articles by 203 different writers, columnists, industry experts, and other contributors. 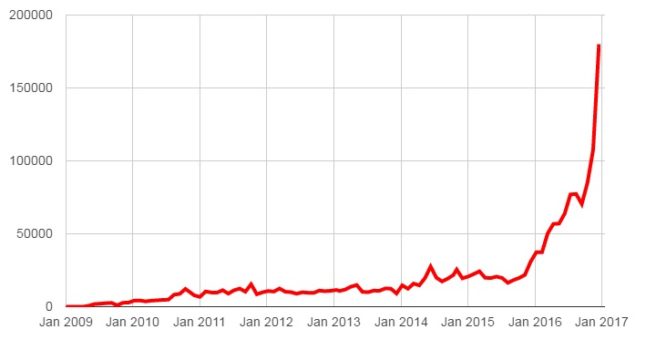 But the focus of the publication — and reader demographics — have also changed over the years.

The first change was that there was a great deal of interest in coverage of OpenSim social grids. People wanted to hear about rankings, social events, ownership changes, where to find stuff and similar issues totally unrelated to enterprise technology. They wanted polls and surveys, and wanted me to run press releases and announcements.

As I kept repeating over and over again, this wasn’t what I was personally interested in or wanted to cover. But nobody else was doing it. Other blogs would come and go, or only post occasional stories, and nobody was doing actual reporting. The kind of reporting where you pick up the phone and call people and ask them to say things, on the record, under their real names. Where you cover the bad news and the good news. Where you try to get both sides of the story — or, in the case of OpenSim — ten or more sides of the story.

Not everyone liked what I was doing. Several vendors have threatened lawsuits. Some tried to organize boycotts. People called me in the middle of the night on my phone and yelled at me. (You know who you are!)

I got more grief from my OpenSim coverage, with its tens of thousands of readers, than for the stories I was writing during the day, where there were millions of readers. Well, except for that one story where I said that Linux was a big flop on the desktop. A lot of folks got mad about that.

In fact, as I write this, I’m getting grief from a grid owner who wants to have prior approval of any quotes of his I publish. Nope, can’t do that. If there’s a mistake, I’ll fix it. But nobody gets  to read articles before publication for “review” or “proofreading.” At least, not until Trump revokes the First Amendment.

Then, over this past year, the demographics changed more dramatically than ever before.

It used to be that readers were pretty evenly distributed between those who read the OpenSim-specific articles, those who read articles about business and education, and those who were looking at generic pages like the home page or the “About Us” page.

Last year that all changed. 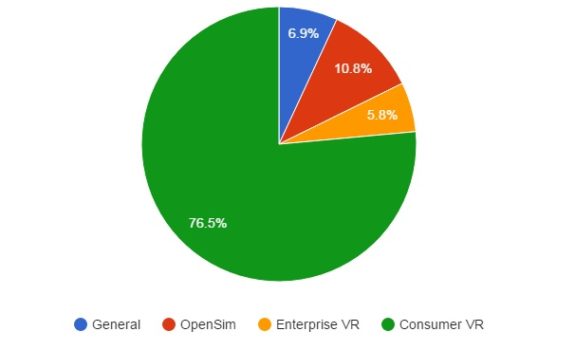 According to Google Analytics, more than three-quarters of all page views last year was for articles related to consumer virtual reality — headset reviews, app reviews, and the Google Cardboard QR Codes page. Only 11 percent of our page views were specifically for OpenSim articles.

Then I looked at how many articles we wrote each year in each category.

OpenSim articles accounted for about a third. Consumer VR was about 41 percent. But a quarter of our time was spent 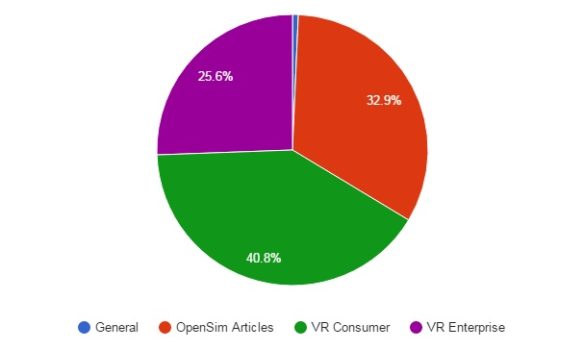 But a quarter of our time was spent covering business and education aspects of virtual environments.

Meanwhile, except for the very rare ad we occasionally run for something OpenSim related — the Dreamland Metaverse ad is a trade for grid hosting — our revenues last year were pretty much completely from the consumer VR stories. Apparently, reading about virtual reality headsets makes people want to run out and buy one, while reading about any of the other topics we cover doesn’t elicit the same kind of shopping desire.

So we are dropping our enterprise virtual reality coverage. Nobody reads it, people don’t seem to care about it much one way or the other, it costs us money, and it doesn’t bring in any revenues.

For those 6 percent of our readers who are shocked — shocked — to see this happen, all I have to say is that every technology publication out there today is now covering virtual reality. So you don’t need Hypergrid Business any more. Just set up a Google alert for “VR” and the name of your industry vertical and you’ll have more news than you’ll know what to do with.

What will we do about OpenSim advertising? It is a pain in the butt to run OpenSim ads, to be honest. We have to set up a new advertiser account with our advertising platform, Google’s DoubleClick. Then we have to set up the billing. And then try to get the advertisers to create an ad that people will actually want to click on. And then deal with them threatening to pull the ad each time there’s a story — or a comment on a story — that they don’t like.

So here is what I’m going to do about ads. The ads will be free. If you have something that you think will interest our readers — a cool new thing on sale on the Kitely Market, an exciting event, what have you, and we like the ad, we’ll run it for a month.

Here’s how to get the ad: Send me an image 300 pixels wide by 250 pixels high, and a link to a webpage. That’s it. I’m at maria@hypergridbusiness.com. Put “Free Hypergrid Business ad” in the subject line.

If the ad is ugly or seems pointless, we won’t run it, and you can’t complain because it’s free. So make it pretty and give people a reason to click.

I’m also going to put up a “free land” page similar to our vendor listing or the QR Codes page. Everyone loves free land, and it’s a great way to give people a reason to try out OpenSim. Email me with your offer — anything from parcels to full regions is okay, and it’s okay to ask people to check in a certain number of times a month to keep the land, but no other strings, please. I’m also going to email all the grid owners and let them know, and will promote the new page heavily on the site. I’ll keep the current vendor listings up, too, with no charge for any of this.

And then if you want to contribute anything to helping keep our OpenSim coverage and pay our freelancers — David Kariuki did an excellent job these last couple of days on that content story — I’ll put up a PayPal support button or some other kind of voluntary funding option.

â€¦ and on a personal note

As of this summer, both my kids will no longer be depending on me. My daughter is going off to graduate school, where she will be researching quantum physics and alternative energy sources, and my son is going off to work and, possibly, start a local farm.

I will take this opportunity to move to New York City, which I love. I’ll take the smog and asphalt any day over all these trees and fresh air here in Western Massachusetts.

If anyone out there knows New York, and can recommend places to live that are tech-friendly and international, I’m all ears.

The other thing I’m going to do is write my novel. Becoming a novelist has been my goal in life since I was a kid. I initially went into journalism, and war reporting in particular, because all my previous attempts at novels were too deathly boring to read. I wanted to have some life experiences, so I’d something to actually write about.

I’m going to have some time now, and I’ve got twenty years of reporting on everything from local school boards to war crimes to international finance. And lots and lots of practice of writing for a living.

So I’m going to give it a shot. And I hope the OpenSim community here will be kind enough to take a look at what I’m doing. The novel I’m currently working on is  about virtual worlds, so you guys might be interested.