Firestorm is the preferred viewer for OpenSim users, based on a survey of  Hypergrid Business readers. Nearly 53 percent of respondents chose Firestorm as their favorite, followed by 26 percent for Singularity and 7 percent for Alchemy. 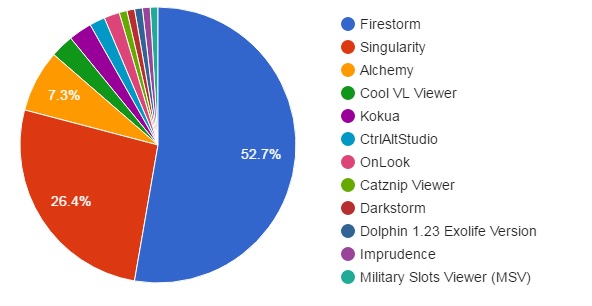 Firestorm was also the viewer that most people had tried. According to the survey, 96 percent of readers have used this viewer, followed by 89 percent for Singularity and 61 percent for Imprudence.

The most appreciated feature of their preferred viewer was the ability to export and import content, selected by 54 percent of respondents. Hypergrid was a close second, with 44 percent, followed by user interface and memory management at 29 percent. Another popular feature was the ability to teleport and build above 8,096 meters, appreciated by  21 percent of respondents.

The fix most respondents wanted to see was to have an OpenSim version of Second Life URLs. Just over 55 percent of respondents said they wanted this. Fixing “unknown user” avatar errors was a close second, at 51 percent.

Other features or fixes wanted  by respondents:

Have more suggestions — or ideas for future surveys? Please add them in the comments below, or email me at maria@hypergridbusiness.com.